Never happy with simple explanations or the status quo, it was all my parents could do to keep me from maiming myself as I searched for answers to complex questions and embarrassing them as I tested the boundaries of self expression. No one knew where to direct this hyperactive curiosity, not even myself.

Ever since I was four I was constantly examining the world around me. I wanted to know how the TV worked and how men got to the moon. I electrocuted myself into unconsciousness in an attempt to self educate. Countless VCRs and Stereos fell to my deft screwdriver as I satisfied my curiosity. It was not until age twelve that I could actually put them back together again, much to the chagrin of my mother. Through questioning and experimentation one answer inevitably led to several more questions and I still learn that way today. 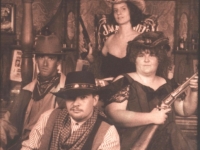 In high school I discovered I had a flare for the arts. I acted in stage plays and even did a stint in Comedy Sportz, a national improv-game competition troupe. After that, I tried to be a rock-n-roll star with a few of my friends for a couple of years with mediocre success. I’ve also written an entire movie script for a futuristic sci-fi action comedy (not as easy as it sounds). Graphics for DC comics and creating all the media for the CalPoly TEACH Program paid my way through college. The arts are not something I’ve given up on; I’m always finding new ways of utilizing them.

During my second trip through the post secondary education system I had the opportunity to head up the college’s Science Club and established a traveling science road show that would circulate throughout the local elementary and junior high schools performing chemistry and physics demonstrations for the children. The schools we traveled to did not have the resources to perform these demonstrations on their own, so we felt we could fill this gap by doing it ourselves. The children would come alive watching the demonstrations as if we had transported them to a fantasy world. Their jaws would drop; not normally accustomed to seeing things they only read about. 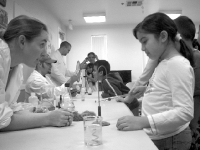 I’ve been teaching now for the past eight years: Automotive repair, Engineering and Physical Sciences with a splash of Drama to keep it all real. I’m always searching for something to satisfy my art vs. science bipolar condition and lets me utilize everything I know how to. Teaching is like having nine jobs all at once: manager, psychologist, accountant and much more. Maybe this is it.